Monday, September 21, 2020 Add Comment
The presence of the Next Gen console is sure to change a lot, starting from Standard on the size of each game due to limitations on a console, but every time the presence of the latest technology or the presence of the Next Gen console, surely there will be something to be sacrificed, one of which is now like usage. Hard drives on consoles that are likely to no longer be used, because the Next gen console has entered the SSD era, which certainly has the speed and power of Write and Read faster than HDD, but the main problem with SSDs at this time is that the price is still quite high . 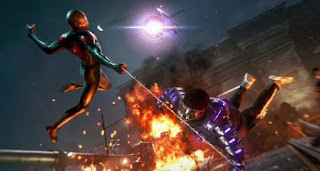 The presence of the Next Gen Console that uses SSDs may be greeted with great enthusiasm by their respective fans, but keep in mind that with the presence of the latest technology, of course the Standard of a game will increase at the beginning of the release of Ps 4, on average their games will eat 45 Gb, however at the time we are going to transition to the Next Gen console like in the game Call Of Duty modern warfare will take up to approximately 100 Gb.

Now comes an official leak about the size of the Next gen Console which comes from the Direct.Playstation.com web which reveals two games that are quite awaited by their presence, namely Demon's Souls and Spider-Man Miles Morales. On the web, the two games don't seem to be kidding about their game size, which is 66 GB for Demon's Souls, then 106 Gb for Spider-Man Miles Morales.

We can conclude that most likely some of the big games will have a Size that is more or less the same as that, and if we look back on the PS 5 which has an internal Custom SSD with a size of 825 Gb. For these two games, when put into the internal SSD PS5, you can say that it is very large, because it takes up to 170 GB, which means that gamers will only be able to save a few games, and of course, if gamers do not "invest" in External SSDs, of course they will. don't want to have to delete the game one of their games.

So, do you think the big games in the future will have a massive size too? And do you think that preparing an external SSD is one of the best steps? Please write in the comments column, ok?