Too long, Fans Finally Made Their Own Kimetsu No Yaiba Mobile Legends skin!

The collaboration between games and anime is one of the things that players are looking forward to. This is what Mobile Legends teased a while ago, proven to have sent several surveys about collaborations that are rumored to be released in the future. Fans are also waiting for the anime collaboration of the game played by millions of people in Indonesia.

Unable to wait, an unknown fan finally took his own initiative and shared his work, to make Nezuko in Mobile Legends the hero Guinevere. 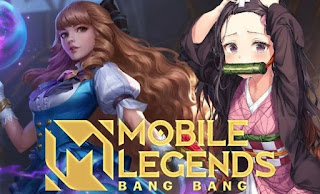 This skin is a skin developed by Mobile Legends fans and distributed by the “topglobalshop” Instagram account. The skin shows Sakura Wishes Guinevere, with the character Kimetsu No Yaiba "Nezuko".

Players can see Nezuko with her iconic equipment, Bamboo which is located on her lips. Not only that, Guinevere's Kimono was also changed to be quite similar to Nezuko's kimono in the anime. Even though it is not 100% similar, this fan made skin provides a pretty clear picture when the Mobile Legends game will actually provide the anime collaboration skin in the future.

Once again, Moonton hasn't revealed that they will make the skin, because it is still a rumor based on surveys and leaks in Mobile Legends.

0 Response to "Too long, Fans Finally Made Their Own Kimetsu No Yaiba Mobile Legends skin!"