Racing in an epic melee battle stage with three factions in the main spotlight, For Honor has been able to survive for years thanks to updates that are continuously implemented by Ubisoft. Yesterday's Halloween event was one of the most exciting since the game was released in 2017. This includes several other events that tell how and what the characters and their factions have to face. Now, the game is getting updates again to keep it fresh. 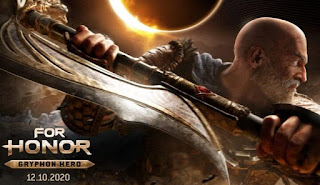 After previously releasing Warmonger, today Ubisoft announced Gryphon as For Honor's newest hero who will fill the fourth season of its fourth year content. Gryphon will be the 28th hero from the total of all characters that have been released in the game.

Previously, Gryphon was known as Holden Cross, the warrior from the Order of the Lawbringers fought alongside Apollyon in the Blackstone Legion. After his death, the Gryphon was rejected by Lawbringers. This saw him embark on a journey around the world to learn new fighting techniques, and of course make new friends.

Armed with a polearm named Bardiche, Knight Errant Gryphon led the resistance against the Order of Horkos which had been a problem for the past few years.

Gryphon is scheduled to be released on December 10 and is priced at $ 7.99 along with a package containing exclusive ornaments to elite costumes. Meanwhile, players who want to get it for free can buy it on December 24, 2020 at a price of 15,000 Steel.

Details about Gryphon will be announced via livestream on December 3rd 2020 at 16:00 WIB via Twitch.

0 Response to "For Honor Announces Gryphon As New Hero"