Thursday, August 6, 2020 Add Comment
The opportunity to pet animals began to become a meme in the gaming industry today. Several social media accounts have appeared whose content is to confirm whether the latest game supports the "pet" system or not, because as we know, if the game doesn't add this option, the game immediately becomes a "dregs" game and must be thrown in the trash. Ubisoft, don't seem to want that to happen to one of their big projects this year - Assassin's Creed: Valhalla. 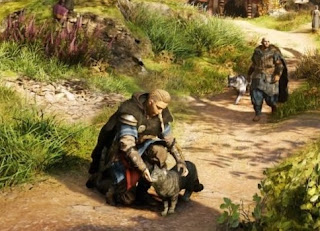 Apart from the busy activities of exploring British soil and recruiting new troops, Eivor will also be given a few side activities that are not so important in terms of your narrative as well as the progress of your soldiers, but at least be a calm for him. One of them is the option to interact with cats that roam the game.

From the video released by the official Ubisoft account, Eivor can not only stroke the meow, but he can also carry it while being petted.

This isn't the first time the Assassin's Creed series has added a pet pet option. Previously on Origins and also on Odyssey. This is a small feature that doesn't add anything to the gameplay, but is appreciated and sought after by many players, especially those with pets at home.

Assassin's Creed: Valhalla will be released on November 17, 2020 for PC, PS4, and Xbox One. PS5 and Xbox Series X versions will follow when the consoles become available.