Is Def Jam Coming Back? Know the Information Here

Wednesday, August 12, 2020 Add Comment
A unique concept that ends in exciting battles filled with fantastic movements and uplifting music that never fails, almost all gamers who have tasted the Def Jam series in the past seem to understand the sensation of this one. Who would have thought that a game with a "crazy" concept by bringing together digital versions of the famous rappers of its time in the same room to punch each other could turn out to be a fantastic game. There is a longing to see the name Def Jam which has long been vacuumed for a return to the gaming industry. This hope does not seem to be just an empty dream.

At least that is what is indicated by the official Twitter account of Def Jam Recordings itself. The latest teaser they released suddenly raised hopes for the return of the name Def Jam to the gaming industry. 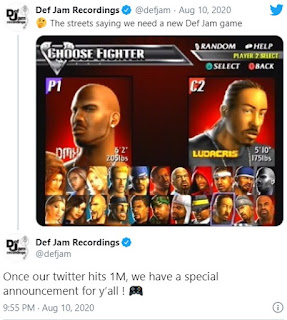 With screenshots of their old games and acknowledging that they heard fans' requests for a new game, Def Jam Recordings promised to have a special announcement if their account reached 1 million Followers. At the time of writing, their Twitter followers are around 994K, with high optimism that this announcement will happen in the near future.

Does this mean we will get this new Def Jam series? Or is it just a Remaster release from the old version? Or will this teaser not turn into anything? We wait for the next official announcement.

0 Response to "Is Def Jam Coming Back? Know the Information Here"