Tuesday, August 11, 2020 Add Comment
Being a publisher of indie games with dazzling quality, the trust that Devolver Digital has placed on Mediatonic for their latest multiplayer game - Fall Guys seems to bear fruit. This nonviolent multiplayer concept in which 60 players compete to be the only survivors via various rounds containing so many obstacles is a huge success. This similar concept to the Takeshi Fortress event in the past has quickly attracted a massive influx of new gamers, especially with the “free” distribution via PS Plus for Playstation 4. On PC, the same success has happened. 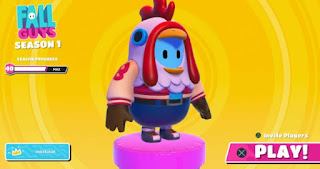 Based on data taken by Githyp, Fall Guys now has the right to hold the title as Devolver Digital's most successful and most popular game release on Steam. He managed to gain 115,000 simultaneous players on Steam, beating the previous Devolver game record - SCUM which had touched “only” 68,000 players in 2018 yesterday. This achievement is even more charming considering that most of the Fall Guys reviews on Steam are also super positive with the concept that Mediatonic offers.

The success and popularity achieved by Fall Guys is certainly an amazing achievement for the scale of an indie developer. How about you? How many of you are busy with this one game?