Bring the highest specifications, the Xiaomi Mi 10 Ultra will be released on 11 August

Tuesday, August 11, 2020 Add Comment
After busy circulating information about a new variant of the Mi 10 series that uses the highest specifications. Now, Lei Jun as Co-founder of Xiaomi confirms this through his personal social media network.

In his personal social media network, Weibo, he said that Xiaomi would soon launch the newest family of Mi 10. 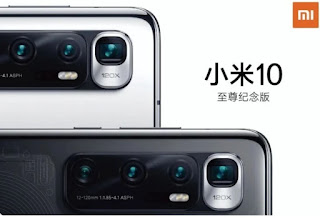 Different names for global variants, Xiaomi uses a different name for the Chinese version, in that country this phone will have the name Mi 10 Supreme Commemorative Edition. This name is used to celebrate Xiaomi's 10 years of work in the smartphone industry.

In addition to releasing the Mi 10 Ultra, Lei Jun also mentioned that on August 11, Xiaomi will release the Redmi K30 Ultra. It's just that, there is no further information about the official specifications of the two phones.

If you take from the various rumors circulating, the Mi 10 Ultra will be powered by the Snapdragon 865 Plus chipset. RAM LPDDR5 up to 16 GB with UFS 3.1 internal memory with a capacity of up to 512 GB. For the camera, it is said that this phone supports up to 120x zoom, higher than the Galaxy S20 Ultra which is “only” 100x zoom.

At the price alone, the Mi 10 Ultra is expected to be priced at the lowest price of 6,299 yuan.

0 Response to "Bring the highest specifications, the Xiaomi Mi 10 Ultra will be released on 11 August"