Wednesday, July 29, 2020 Add Comment
Shocking seems to be the right expression to explain the announcement of Star Wars: Squadrons conducted by EA some time ago. After a strong curiosity about what EA will offer in this super popular franchise after the success of Star Wars Jedi: Fallen Order, they will apparently focus on the action of fighting between iconic aircraft in this sci-fi universe. Having a level of gameplay depth like a fighter class Ace Combat, PC gamers who are interested in trying it naturally also have to prepare their rig. 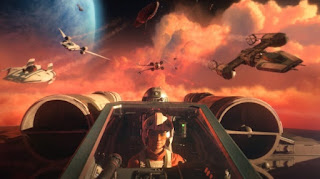 On paper, it might look like a shallow fighter game. But with the presentation that EA and EA Motive had done some time ago, along with a preview of some Youtubers and the media following it, Star Wars: Squadrons turned out to have some interesting mechanics that made the skill not only be determined by how well you maneuvered, but also how much you understand the aircraft used, which is also divided into several different classes. With the release time getting closer, the specification information needed for this game also finally rolled out, along with the need to enjoy it fully in VR format:

Star Wars: Squadrons themselves planned to be released on October 1, 2020. How about your own PC? Ready to handle at the maximum quality?