Wednesday, July 29, 2020 Add Comment
Sucker Punch Productions has just released the latest update for Ghost of Tsushima, version 1.05. The patch update, which has a file size of 2.78 GB, presents a variety of new features, one of which is the additional difficulty or "Lethal" difficulty, which if we choose this difficulty level will make the enemy weapons more deadly, but this also applies to katana Jin, enemy movements become more aggressive when fighting, the enemy can find out the player's presence faster, and Parry and Dodge will be more difficult. 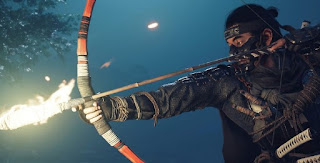 In addition, in this update there are also additional features that make it easier for players to deal with any enemy through the Lower Intensity Combat option. This feature makes enemy attacks that normally cannot be deflected easy to ward off, the enemy will break or break after launching a combo attack making the opportunity we can use to counterattack, the enemy will not attack when the player is healing, and the level of alertness the enemy will become lower.

Finally, one more interesting feature added through this update is the option to set the text size and color variants of the subtitles (yellow, blue, red, green) and the option to turn off the name of the speaker or the person who is speaking when subtitles are activated.

Version 1.05 update from Ghost of Tsushima is available and you can download it right now.